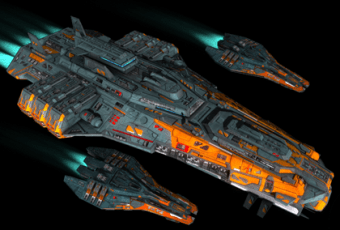 In Starship Battles, there are three types of cards that depict ship compartments: Attack, Defend, and Support.  The most important of these is Attack.  Without offensive capabilities, a battle would be quite one-sided.  In this post, we’ll take a look at the Attack cards, and how they’re used. 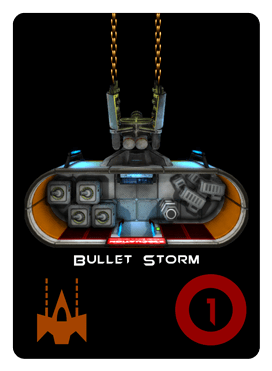 Bullet Storm costs one resource point, and has one attack.

Like other ship compartments, Attack cards have a resource cost in the lower right corner.  All other things being equal, the cheaper a card is to use, the better.  The less you use on one card, the more you can use on another.

To the left of the resource cost are icons that tell you the ability of this ship compartment.  In the case of Bullet Storm, there is one attack symbol.  As such, Bullet Storm adds one attack draw for the player each turn.

Almost all Attack cards conform to this simple layout.  However, there is one special card with a unique ability: Emergency Power Conduit. 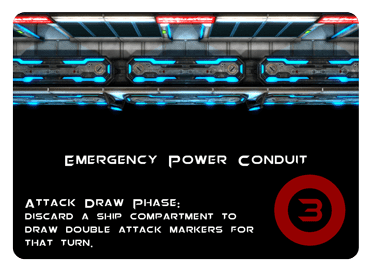 Emergency Power Conduit’s unique ability allows a player, once per turn during the Attack Draw Phase, to discard any of his ship compartments in order to draw double the attack markers on that turn.  You might wonder why you would ever want to discard one of your ship compartments.  That seems like a horrible strategy, doesn’t it?

Well, imagine a scenario where you have a ship compartment with only one damage point remaining.  You know it’s likely to be destroyed, so why not put its destruction to good use?  Double attack markers is nothing to sneeze at.  It can be a major boost.

Let’s consider another scenario.  You and your opponent have been trading blows, and you both are down to your last couple compartments.  You’ve got Bullet Storm and Emergency Power Conduit remaining.  You are hanging on by a thread; each compartment has only a single damage point remaining.  But your opponent is in the same boat.  This is a good opportunity to go for broke.  You might just pull out a brutal attack, now that you’ve doubled your odds for success.